The Golden Arrow of Earl's Hill

Of the many legends and customs connected with Earl's Hill, the most well known is the legend of the Golden Arrow. This golden arrow was said to have been lost by a Saxon king during a battle on Earl's Hill in the seventh century.  For centuries villagers would go up to  the summit of Earl’s Hill on Palm Sunday to look for the golden arrow, and to picnic and play games on the hilltop. The event was called  Pontesford Wake, and was last held in the 1950’s. However it had already begun to decline  in popularity in the late nineteenth century, when contemporary reports suggest  attending the Wake was 'confined to the wilder spirits of the neighbourhood', and ‘respectable’ villagers stopped attending. According to different versions of the  legend, finding of the golden arrow could mean the finder would either have good luck for the following year, or inherit a great estate, or find true and  enduring love.

After the search for the golden arrow the young people of the  village would race down the hill, into the woods that cover the valley of Habberley Brook, to a waterfall and swimming hole called the  Lyd  Hole or Lydells, which is supposed to be bottomless. The first person to dip the ring finger of their left hand in the water would, according to the legend, marry  the very next person of the opposite sex that they saw.

This combination of the end of winter, a golden arrow, a  ‘bottomless’ water-hole, the finding of a husband or wife, etc. suggests that whether they knew it or not, the people who took part in the Pontesford Wake  were participating in the surviving fragments of a pre-Christian fertility ceremony to welcome in the new season. And, as with many ancient ceremonies, this seems to have been taken over and adapted when Christianity came to Britain.

The Golden Arrow in 2013: Finders Keepers 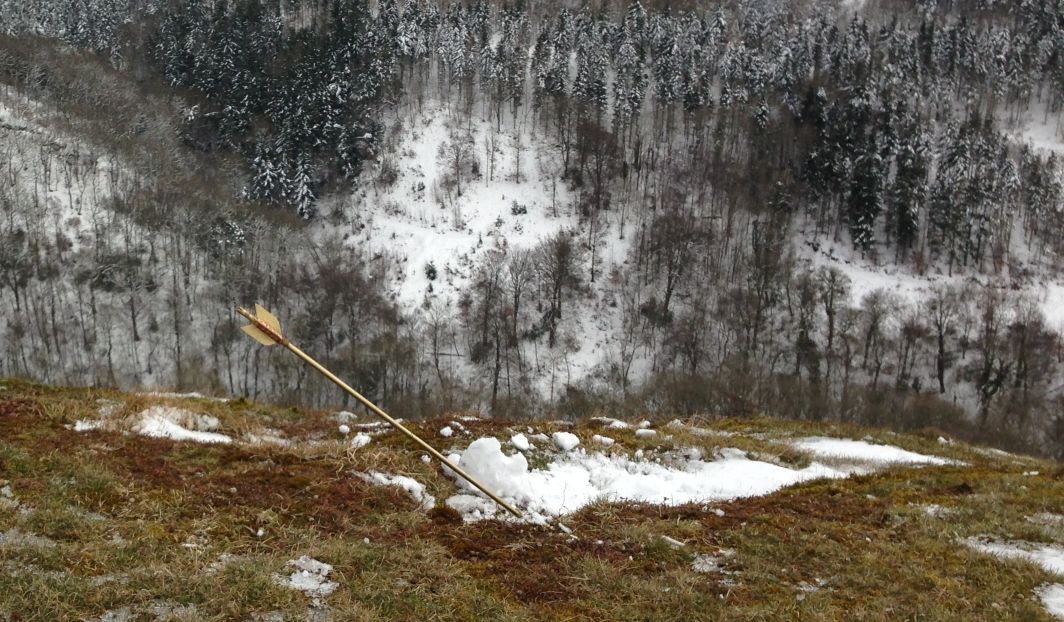 This year, as part of the 'Know Your Place' project celebrating the unique heritage of folklore of Earl's Hill, a small number of hand-crafted golden arrows were placed on the hill on Palm Sunday, March 24th. These arrows all have a secret compartment containing a  golden necklace, as well as a tag giving a link to this site. The arrows and necklaces are gifts to those who find them. However it would be much appreciated if the new owners would either email a photo of the arrow in its new home to goldenarrow01743@yahoo.co.uk  and/or fill in the short questionnaire below.